An Interview Q & A with Los Angeles Based Coast to Coast Artist.

Today’s Artist Spotlight is Veronica Fernandéz. If that last name sounds familiar, it’s because she’s none other than the daughter of Rafael Fernandéz a.k.a The Latin Babbler. Veronica Fernandez is a mixed media artist from New Jersey, who is currently working in Los Angeles, California. Her work discusses relationships between people and their environments, drawing from her own memories to illustrate the complexities of domestic life. Pulling from a variety of source material – from images of family members to art historical references.

Veronica blurs personal recollections into emotive scenes that evoke a shared nostalgia. She purposely reworks aspects that feel familiar into unfamiliar territory, taking what is hers and morphing it to better relate to a general consciousness. Drawing attention to the impermanence of emotions, Fernandez imbues her work with a sense of unfinishedness, allowing the narratives to remain open-ended for the viewer to make their own.

Not only is she an amazing Artist, she is also a humanitarian. She works alongside her sister; Brianna, who is also the founder of Ignite The Hearts Foundation. It’s an organization that helps serve the poor, the homeless, seniors, youth, and many individuals and families in need.

I had the honor to invite her for a Q and A.

Tell me about your background;

Where were you born? Where did you grow up?

A:I was born at a naval hospital in Norfolk, Virginia and raised in Miami and Jersey, but I  spent most of my life in Jersey. I’m currently working from Los Angeles, California, so now I’m a Jersey girl navigating my way through the West Coast.

What inspires you to create art?

A: My work is inspired by my own experiences and familial relationships I’ve grown up with, and the relationships that people have with one another and their environments in general. I’ve always been interested in how people develop and how they establish their own presence over time. I think the world throws obstacles at all of us and the psychological and physical journey that comes with coping, transforming, and just simply living inspires me, because that process is different for everyone. I’m inspired by the individual in general, how we react and move in places within and outside ourselves.

You’ve had shows in Galleries in NY, FL and L.A, is that correct? Anywhere I’ve missed?

A:  I’ve shown in NYC, LA, Italy, so far, and I am currently a part of upcoming fairs in NYC, Italy, and FL.

What is your favorite painting by you and Why?

A: A favorite painting by myself that I honestly wished I still had is Wrestling In the Living Room (Angry When I’m Thirsty). I think aesthetically, I loved the end result as far as the expression of the figures, the colors, and objects painted. I love painting children and that was one of the first paintings within this body of work I’m doing that I thought my personality came through the most.

A: That painting is a smaller work on paper I created earlier this year, it’s based on an old photograph of my father when he was a child in PR, standing on an empty road. When I first saw the image I thought it was just special given the stance of the child, he’s standing in such a playful, confident way and I thought it was just something so simple and powerful. The original image was beautiful in general, just the cool tones and serene aura it had. I love incorporating children into a work because there is this kind of fearless, fresh start to them as human beings. When I think about my father in general, and the complex life he’s had up until now,  and see that photograph I wanted to preserve this kind of strength that a child has.I think before we encounter a lot of the experiences that start conditioning us into how we perceive the world, whether good or bad, there’s this naivete or I guess innocence that keeps us from having limits to how we navigate ourselves. There’s a kind of potential there that seems endless. I think that’s the immediate emotion I felt seeing that photograph and just that stance. That was one of the few images I barely reconstructed in any other way because I didn’t feel the need to. It was one of the few pieces I saw and felt it did exactly what I wanted it to– I felt that it had an aura to it that served as this invisible thread that connects all of us as people, this desire to have that strength before we could recognize restriction. 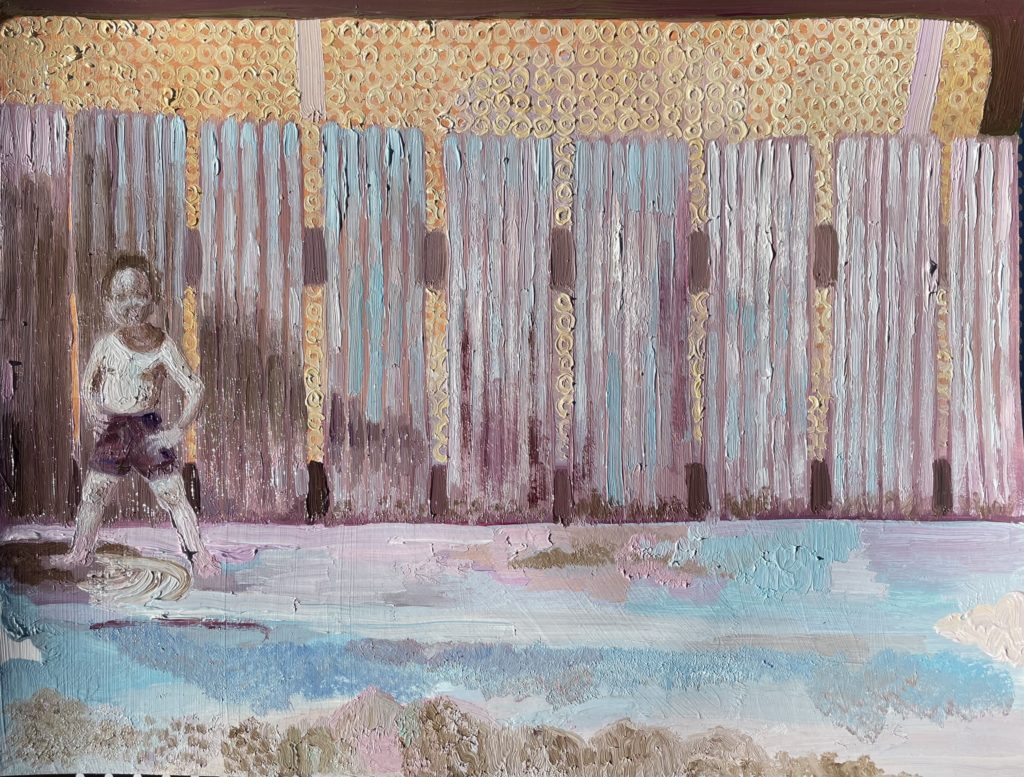 Who is your inspiration as a painter?

A: I have a few artists I find inspiration in, to name a few: Noah Davis, Christina Quarles, Francis Bacon, Cecily Brown; Artists that challenge figuration in their own ways. Noah Davis is definitely up there, for sure! I think he tried to connect to the community a lot, not only through opening up a space that gave access to a lot of people (The Underground Museum), but his work touches me in so many different ways. It feels very human and vulnerable. I think regardless of the kind of relationship you have to the art world or what your background is in general it touches you. I want my work to have that effect on people. I don’t want it to be something only one kind of person can feel or comprehend. I think that defeats the purpose of art, especially when the art world claims it’s reflective of the culture we all make up.

What is your favorite painting by another Artist?

At what age did you start painting?

A: I started painting when I was 18. I grew up drawing books here and there, making my own stories or creating comics. In highschool I worked a lot in pastels and colored pencils doing more surrealist drawings or portraits. Our art program couldn’t afford paint really, and I didn’t even know what oil paint was. In my first year of college at The School of Visual Arts I learned the medium and made paintings here and there (I was fortunate to get into that school since it’s not cheap, so I was experimenting with other mediums like soft sculpture, and digital programs). It wasn’t until 2 years ago I started focusing primarily on painting because it was hands-on and challenged me more as an artist.

What is a short term goal and long term goal?

A: A short term goal is to have my first solo hopefully by next September, or early next fall.

A longer term goal would be to leave my mark hopefully in the art world, and to find ways to give more access to the art world to everyday people.

Veronica’s work is phenomenal and speaks to the soul. The most moving aspect of many of her pieces to me, are the eyes! They speak volumes! What they say are subjective, take a look for yourself!